A Poetry & Book Appreciation Day programme was held on the 10th October 2019 at the college Conference Hall. With creative writing in English among Mizos gaining in popularity, this was a wonderful opportunity to introduce some of the finest young writers in Aizawl to our literature students. Book reading is, of course, also an issue that needs to be re-introduced today with digital gadgets taking over the time and attention of young people everywhere.

Hannah Lalhlanpuii, a research scholar at Mizoram University who is also an upcoming writer of note, talked about her novel, "When Black Birds Fly” which is about the 1966 Mizoram rambuai narrated from the perspective of a young boy.

Somte Ralte and Lalsangliani, who both write good, pertinent poetry in English and have both had short stints as substitute teachers in the English department, presented their poetry.

Jacqueline Zote, a young journalist who takes on bold themes and issues in her poetry, and Kim Miller, one of the few male Mizo writers in English, also gave readings of their poetry.

Dr. Lalthansangi Ralte, a 2005 English Honours alum, and the then Head of the English Department at IQFAI University Mizoram Campus, gave the assembled English Core students a pep talk on the importance of books and reading. She set up a temporary book stall from the Book Café, a very popular book shop recently started by her with her brothers, who are also alumni of the college.

The programme was an extension of Poetry Day organised by the dept. where poems written by students from various departments were collected and displayed across the college building.

The P & BA Day appeared successful with most students showing considerable interest in the proceedings. 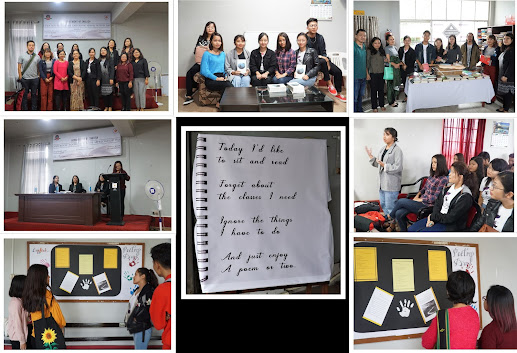 In what turned out to be the department’s last outing and major activity before the pandemic closed down the institution from the 17th March 2020, on January the 28th 2020, final semester students of the English Dept. alongwith seven faculty members, visited the college's two adopted schools at Hmuifang, a picturesque tourist spot some 53 kms away from Aizawl.

Splitting up into two groups, we presented an assortment of gifts and a Little Library to both the Govt. Primary School and Neihlaia Memorial Middle School. The Little Libraries were stocked with books in English and Mizo donated by students and teachers to encourage a love of books and reading among the schoolchildren.

At the Middle School, the students also spent time interacting in spoken English with the children. This was the first direct interaction made with both schools by the college since the school and village adoptions were finalised in November 2019. 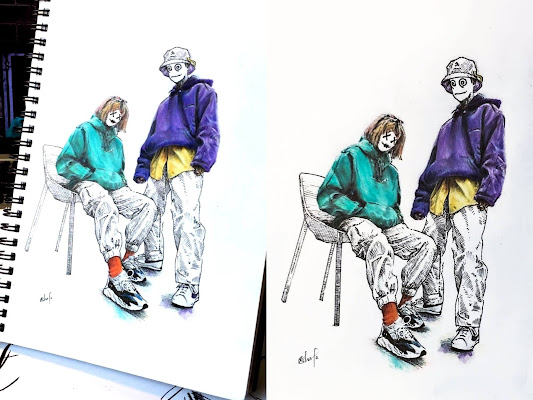 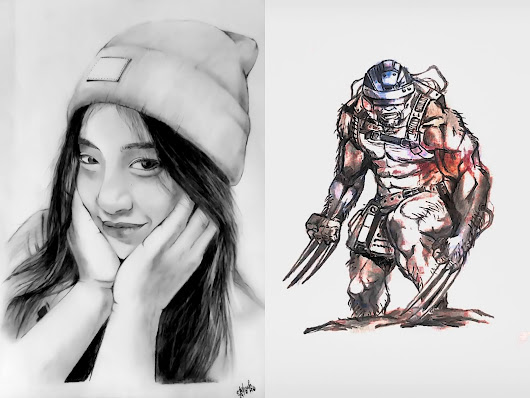 Tommy Malsawmzuala, 5th sem, took some very basic art lessons for a couple of weeks when he was at school in New Delhi but is mostly self-taught. He says he enjoys doing portraits and some anime as well. He is presently Leader of the college Art Club and has been very helpful in assisting with designing banners and posters for college activities and functions.
at February 22, 2021

What good does it do,
To the girl you call names.
What good is in it,
To the guy you throw punches at.
All that remains
Is a desolate soul.

What would you do
If she left you one night
Painted bruises and cuts over her body.
Now closing her fragile heart forevermore,
She embraces your children
With the love you could not give.

Are they still calling you names?
Is your body aching?
Are you in pain?
Are you feeling ashamed?
Are you blaming yourself?
Do they hear you cry?
Are you tired of it all?

Know yet;
You are a person.
A person with dignity and respect.
A person who is meant to soar high,
Born with wings and starry eyes. 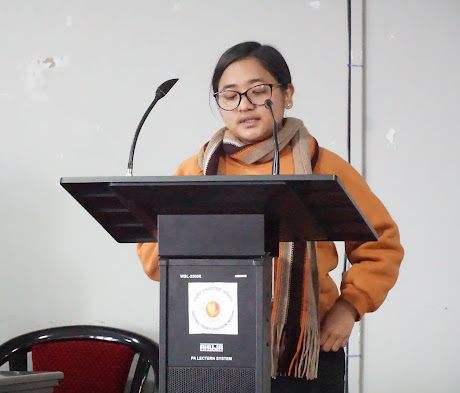 What exactly is gender equality? Is it the equal access of resources regardless of gender? Or is it giving the other gender more advantages with no backlash or weight? Can there actually be perfect equality among the genders?

The 'feminism movement' started in the 15th century where women stood up and showcased rampant oppression of women, and till today new waves of female empowerment can be seen.

Due to lack of education and primal nature, society and people in general looked down upon women seeing them to just 'breed a child,’ 'take care of a family,’ they were not taken seriously which caused a lot of abuse, and having a daughter was unfavourable. This can be seen in all kinds of societies, even us Mizos have a handful of stories about abusive drunk dads who beat their wives and children, and when it comes to India there have been practices of child marriage where the parents find a partner for their child and get married by the time they are 'old enough' which leads them to get married to middle aged-old men who are often alcoholic or abusive in general. After going through all the hardships, if these men they married were to die early, these women would be seen as widows, and Indians being as superstitious as they are, see these widows as an omen bringing them bad luck, hence they would get incinerated along with their husbands.

Education plays an important role at how women are treated at present, but it sure is not in a perfect state especially when we look at the Middle East where the women have no rights to choosing their partners, domestic violence is high, there is discrimination in employment, healthcare, inequality in child custody, divorce, inheritance. Meanwhile us (Mizos) in a male dominated (patriarchal) society face little to no discrimination against women, in some cases due to religion the woman's family may not permit the girl to be with her man due to their differences.

The reason women worked less then is no question that they chose to be at home with the children and be a mother while the father worked, this has typically been the norm for a very long while. Again due to the emergence of education, women nowadays are working hard to be independent and have a head start before their marriage in order to avoid having financial hardships. This is becoming the social norm and a healthier approach to starting a family, realistically not all marriages work and it is horrible when the woman is left with nothing else.

The points elaborated above are to highlight that the perfect or ideal form of gender equality is impossible to be practised and I believe that women in our society are in a better place than at any time in our history. Then again this doesn't mean gender discrimination does not exist anymore or we should stop being open to new ideas. Rather implementation of better practices or of improving the system bit by bit will go a long way in getting to our ‘ideal' sense of society.

Steven Ramthanmawia is a 3rd semester student. He bagged third place and a cash prize of Rs 1000/- with this essay. 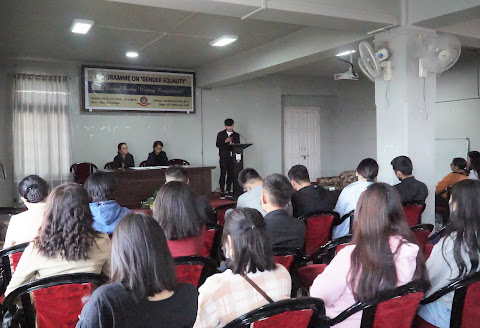 They say that night brings out the demons,
And that home is your escape.
But what happens when my work
keeps me later than I anticipate?
Am I to be fearful of what lurks ahead?
Would calling a friend work instead?
I scan my environment consistently,
As they've been kidnapping women recently.
I see them watching, oh the misogyny.
Why won't a man make safe company.
Should I defend myself using my fist?
I can't, I'm small at the wrist.
Should I run or play their game?
Doesn't matter, both results in the same.

So you tell me one gender is superior over the other?
A stereotype;  furled and unbothered like any other.
We project and advocate intersectionality,
Because gender is not always our biggest identity.
And why should we have to fight for our rightful place?
In our own turf, where we were born and raised.
Racially profiled and stigmatized,
"Just a woman" is how I'm recognized.
They tell me that I'm soft and delicate,
Made of porcelain and easy to break.
Yes I may be a woman,
But first I'm also human.

So today I raise my voice,
It is for you to make the choice.
I suspire and ache for freedom,
Do you really need him?

Saihminghlui Sailo, also our 1st sem student, won the second prize for this poem at the Gender Equality Writing competition. She took home Rs 1500/- and a certificate for these fine lines. 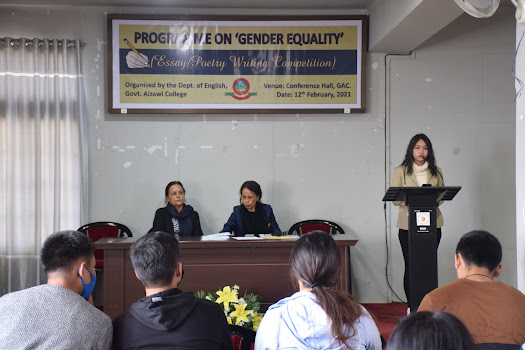 Patriarchy, patriarchy.
We shout. Often memed.
Stereotypes get flung around
from viral videos of rage.
Often, showing smug calmness
and emotional stability
feel like the gatekeepers of truth.
The ones who seem to make sense
rhetorically, with semantic wits.
Even birthing stances
such as anti-feminists.
These stereotypes and prejudices
are diverting the conversation.
A conversation deeply needed.

Political equality was the first wave
Socio-economic equality was the second wave.
And the rights ignored by the second wave
was focused on the third wave.
Intersectionality, a closer look with race
and other factors being focused on.
And finally, the fourth wave -
empowerment of women, digital feminism.
And none should be dismissed
since they are fights not won
but slowly pushed.

Backlash happens, and the fights won
they get stripped bit by bit.
Some even consider it a slur, a bad word
an insult to call someone.
Equality is radical indeed
when the status quo has inherited injustice.

Feminists and their aim
of gender equality;
is indeed noble.
And being ascribed a male at birth
we often have to acknowledge
how systems of patriarchy
have been an obstacle for women.
Speaking as a man
I'd rather an equal competition
than the folly of old patriarchy.
I see feminists as comrades,
progressives working on improving society
and tackle the ignorance which birthed
the status quo we wish to dismantle someday.
Freedom is merely privilege extended
unless enjoyed by one and all.

Chawngthanmawia is our 1st sem student, and this was his prize winning entry at the recent Gender Equality Writing Competition, which earned him a cash prize of Rs. 2000/- and a certificate. 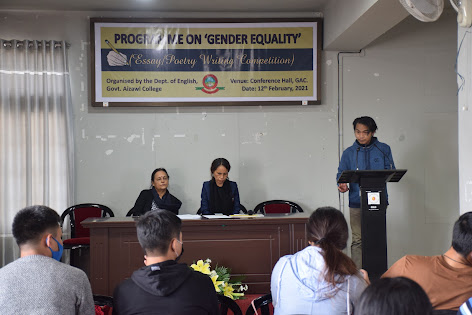 On Friday, the 12th February 2021, the Dept. organised a programme on Gender Equality. With the govt. of Mizoram still placing fairly strict restrictions on the number of people assembling together, it was decided to make it an Essay/Poetry Writing Competition open to English Elective and Core students in all the 1st, 3rd and 5th semesters. The student participants then read/presented their entries at a small gathering at the college conference hall. 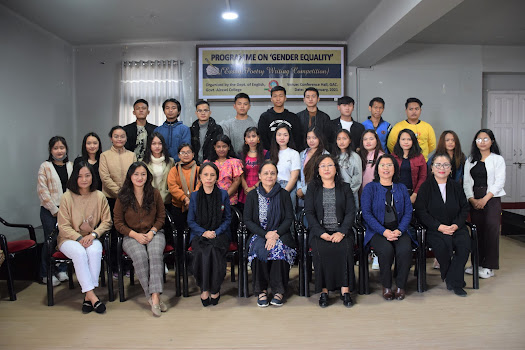 The prize winning poems and essay, as well as a number of other entries will be posted on this blog over the coming days.

All the participants were presented with certificates of appreciation, and the Dept. plans to compile all the entries for documentation purposes. 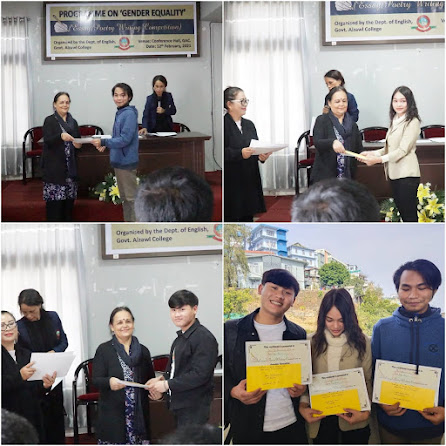 GAC Lit Orbit
Dept. of English, Govt. Aizawl College, Mizoram, India. This is the virtual space for our activities, skills, talents and just about anything and everything else to do with us